New details are emerging about the cause of a major structure fire in Nipomo last month.

CAL FIRE investigators announced Friday the fire that started at a farmworker housing project in Nipomo was intentionally set.

The housing project on Mads Place in Nipomo was slated to house more than 100 migrant farmworkers as a part of a controversial plan by Santa Maria strawberry farmers Greg and Donna France.

The Frances bought seven lots on Mads Place, off of Oakglen Avenue, and had finished building three of the homes when one of the houses under construction caught fire the night of April 6.

Fire officials said the wood frame went up like match sticks and caused damage to the home being built on the next lot over.

Many neighbors told KSBY they were not happy about the housing project.

"They were not surprised and they were actually relieved that this is another step forward in the investigation and so now they hope that the next step is that they are able to find the suspects and arrest them," O'Donnell said.

The cul-de-sac where the homes were being built is now under 24-hour surveillance. None of the houses have "for-sale" signs up and O'Donnell says the Frances are still figuring out what to do with them.

Residents told KSBY Friday, they do not feel as safe in the neighborhood now and although many of them where unhappy about the project, it is also upsetting to know there is an arsonist in the area.

One resident said she does not suspect any of her neighbors started the fire because it put all of their homes in danger.

The Frances also said in a statement today, they are offering a $10,000 reward for information that leads to the arrest of the arsonist.

"To the individual(s) who committed the crime of arson and made multiple and serious threats of further harm, you have not won.Violence and intolerance are never the solution and we are saddened to have seen it emerge in our community of Nipomo.Because of our concern for the neighbors we have met and spent time with through this process, we are working with authorities on offering a reward of $10,000 to anyone with information that leads to the arrest of this arsonist(s) so they are no longer a threat to this neighborhood or the broader Nipomo community."

Arson investigation underway in Nipomo following an overnight house fire
KSBY.com / April 7, 2016 / Audrey Liviakis
An overnight fire in Nipomo damaged two homes that were under construction and spurred an investigation into potential arson. The housing project on Mads Place in Nipomo was slated to house more than 100 farmworkers as part of a controversial plan (see article below) launched by a Santa Maria farm company. One home that was under construction was completely destroyed in the overnight blaze. Another was partially damaged. Santa Maria farmers Greg and Donna France purchased seven lots in the area of Mads Place and South Oakglen Avenue. Three homes have been completed, while two were under construction. The other lot has yet to be developed. As part of the project, 16 farmworkers were supposed to live in each home as part of a temporary federal agricultural program. Under the program, they would house and transport workers to local farms for six to nine months. Many neighbors were unhappy about this plan, expressing concerns about the potential for crime, noise and loss of property value. It remains unclear whether the fire is the result of arson, or related to controversy surrounding the purpose for the complex in any way. ​

"These are temporary people living there. They won't care for the house as much as a resident would. I'm assuming these houses will deteriorate and become a blight on our court,"

Neighbors concerned over planned farmworker housing in Nipomo
KSBY.com / Matt Van Slyke 4/5/2016
A Santa Maria farm company is moving forward with plans to house more than 100 farmworkers in a Nipomo neighborhood, sparking complaints from some residents. "I'm not too happy with it since this was going to be single family residents' homes," said Nipomo resident Bill Lynch. Seven houses off S. Oakglen Avenue in Nipomo were purchased by two local Santa Maria farmers, Greg and Donna France. The current plan is to place 112 farmworkers within the homes, resulting in 16 workers per household. Neighbors have expressed concerns about the potential for crime, noise and loss of property value. "16 people per household is just far too many. What's the company's plan on maintaining these homes?" said Bryan Galvin, a Nipomo resident.
The farmworkers who will live in the homes will be part of the federal H-2A agricultural program. They will reside in the homes up to nine months and will be transported to fields in Santa Maria. "These are temporary people living there. They won't care for the house as much as a resident would. I'm assuming these houses will deteriorate and become a blight on our court," said Lynch. San Luis Obispo County supervisors say they are aware of the concerns from neighbors but cannot legally limit the number of occupants. "You have a commercial enterprise competing with the residential land use and those two conflict. We legally have nothing on the books to prevent this in the future," said 4th District Supervisor Lynn Compton. Although county supervisors have no legal jurisdiction, Compton said she is still going to try to draft some sort of ordinance. "We are looking at legal remedies and see what we can do, so we are currently in the process of that," said Compton. KSBY reached out to Rancho Harvest to speak with Greg and Donna France. Representatives of their company said they have no comment at this time.​ 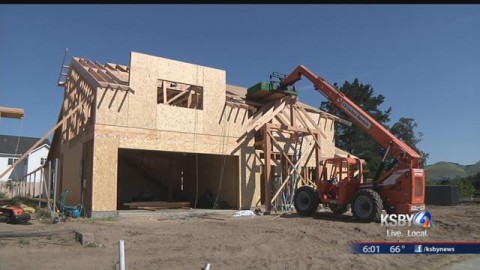 One home that was under construction was completely destroyed in the overnight blaze. Another was partially damaged.